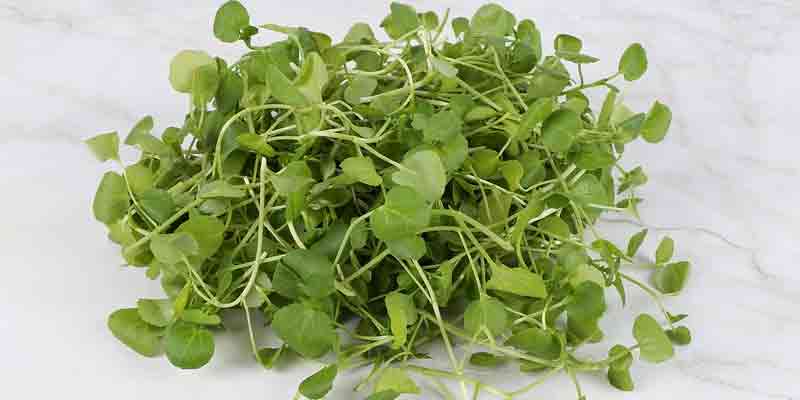 Watercress or yellowcress is an aquatic flowering plant that’s known as a superfood. This plant is packed with a large amount of nutrition, and it’s healthy. For humans, watercress is safe and healthy to eat. If you own guinea pigs, you may wonder if you can give watercress to them as well.

Is It Healthy For Guinea Pigs To Eat Watercress?

Watercress has a lot of nutrients that can benefit guinea pigs. This aquatic plant boasts many important vitamins and minerals, especially vitamin K.

Feeding watercress can have some benefits for your guinea pigs. This includes the following:

Guinea pigs kept in captivity are prone to scurvy. Scurvy is a disease resulting from a lack of vitamin C.

Guinea pigs are unable to synthesize or store vitamin C, so they need a constant supply of it each day. Without enough vitamin C in their diet, they will become ill.

Since watercress is aquatic vegetation, it contains a good amount of water. This will provide a guinea pig with enough water to keep them hydrated.

Watercress is rich in vitamin C, which helps boost the immune system of guinea pigs. When fed plenty of this vitamin, guinea pigs will be less likely to get ill. If they do, they should recover quickly from their illness.

Watercress is a good source of antioxidants. An antioxidant is a compound that helps prevent free radicals from damaging the cells in the body.

When there are too many free radicals, the cells can get damaged. This will result in the guinea pig getting diseases and becoming sick.

Baby guinea pigs should be fed any watercress. Their digestive system has not developed enough for them to digest the vegetable properly.

Instead, they should be fed an unlimited supply of timothy hay and their mother’s milk.

Once the baby guinea pigs reach the age of 3 weeks, you can introduce them to watercress. Make sure to cut the watercress into tiny pieces first. This will make it easier for them to digest it.

On the other hand, if they seem fine and enjoy eating watercress, you can continue to feed them a small amount, once a week until they are an adult. Then you can increase the amount and feed them twice per week.

The stems of the watercress are safe for the guinea pigs to eat. It’s edible and doesn’t pose any harm to them.

Most cavy owners will simply feed them the whole watercress. The leaves attached to the stem.

However, these are aquatic vegetation and the roots will usually spoil first. Be sure to cut off the roots first before feeding the watercress to them.

How To Feed Watercress To Guinea Pigs

There are a couple of ways to feed watercress to guinea pigs. You can feed them fresh watercress or mix it with other foods.

Before feeding them, make sure to clean the watercress thoroughly. These are aquatic vegetation and most likely will have debris and pests on them.

When the watercress is fresh, it will have a crunchy texture and edible. The guinea pigs should have no problem eating it.

You can either feed them just the leaves or the entire vegetable that includes the stem. If giving the watercress with a stem, make sure to cut off the roots.

Mixing Watercress With Other Food

How Much Watercress To Feed Guinea Pigs?

When it comes to feeding them watercress, you should give them a small amount of it. You can safely give them 7-10 sprigs of watercress.

While vegetables are part of their daily diet, watercress isn’t one of them. This vegetable should be not fed to them on a daily basis.

Too much watercress can cause health issues for them due to the calcium and oxalate content.

Apart from these, there are other foods that you can feed your guinea pigs for a complete diet.

If this is the guinea pig’s first time eating watercress, you should test them first with a small amount. After giving them some watercress, wait 24 hours to see if they have any allergic reactions. If they do, the cavies will have diarrhea or an upset stomach. Avoid feeding them anymore if they show any of these symptoms.

If your guinea pig doesn’t have any allergic reaction, you can continue feeding them watercress.

How Often Can A Guinea Pig Eat Watercress?

The key to keeping your guinea pigs healthy is moderation. This means feeding them watercress only once or twice a week.

Also, you should space the days out when feeding them this vegetable. For example, if you gave them watercress on Sunday, wait until Thursday to feed them again.

Watercress should only make up 10% of their entire diet. The rest of their diet should come from quality pellets, timothy hays, and vegetables. About 1/8 cup of pellets with plenty of vegetables such as spinach, kale, and carrots each day.  Also, make sure there is an unlimited supply of hay available to them at all times.

Other Vegetables That Guinea Pigs Can Eat

Guinea pigs can eat celery including the leaves and stalk. This vegetable is a rich source of vitamin C, fiber, and protein. Due to a decent amount of calcium in the celery, it should be fed to them in moderation. Excessive feeding can lead to diarrhea and urinary problems.

Lettuce offers a lot of nutrients that the guinea pigs need. It’s a good source of vitamin A, vitamin C, and low in calcium oxalate. This makes them an excellent choice to feed the guinea pig daily. However, avoid iceberg lettuce as it doesn’t have many nutrients and very high in water content. This can lead to digestive issues for the cavies.

Radishes are rich in nutrients such as fiber, vitamin C, and iron. It also contains calcium and oxalate, which can be harmful to guinea pigs. For that reason, feed them radishes in moderation to avoid any health issues.

Watercress is a great treat to feed guinea pigs due to its nutrition. Since watercress contains a high amount of water, it should be fed to them in moderation. Otherwise, the guinea pigs will have digestive issues such as diarrhea and an upset stomach.